Acoustic neuromas, also known as vestibular schwannomas, are benign tumors that arise from the cochleovestibular (hearing and balance) nerve. Over 5,000 of these tumors are diagnosed in the United States per year. These tumors are slow growing and begin within the temporal bone which contains the inner ear. As these tumors expand, they grow into the intracranial cavity and lead to compression of cranial nerves that regulate facial movement, facial sensation, hearing, balance, speech and swallowing. In addition, the portion of the brain that regulates coordination and motion (the cerebellum) and the brainstem itself may be severely compressed by these tumors. Early in tumor growth, the acoustic neuroma is limited to the internal auditory canal. Patients with a stage one, or intracanalicular-stage, acoustic neuroma (confined entirely inside the internal auditory canal) often complain of difficulty with hearing in one ear, which may begin suddenly or insidiously. Hearing loss may be accompanied by noise inside the ear (tinnitus), dizziness and vertigo. 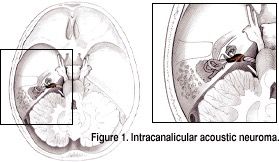 Figure 1 is a view of the head from above. The posterior fossa with the intracranial contents of the cerebellum, brain stem and cranial nerves, as well as the temporal bone can be seen. The temporal bone is a part of the skull base. In the temporal bone is the internal auditory canal that allows the cochleovestibular (hearing and balance) nerve and the facial nerve to pass from their intracranial site of origin to either the cochlea (snail-like hearing organ), vestibular apparatus (balance organ with three semicircular canals), or the muscles that move the face. Acoustic neuromas most commonly arise in this canal. In Figure 1, a small intracanalicular tumor (colored brown in this illustration) can be seen.

Acoustic Neuroma in the CPA 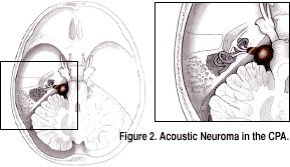 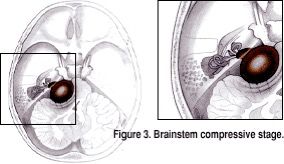 The brainstem compressive stage can be seen in Figure 3. In this figure the brainstem, cerebellum and cranial nerves are being compressed by the tumor. Acoustic neuromas are almost universally benign (not cancer), so they do not erode into or replace brain tissue. Rather, acoustic neuromas cause damage by taking up space in the intracranial cavity where no extra space exists. Compression and attenuation of vital structures in this stage can lead to increased headaches and numbness of the face. 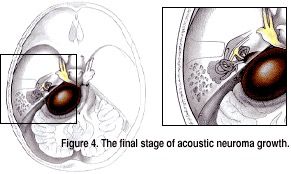 Drainage of the cerebrospinal fluid in the head that bathes the brain, increased pressure and further compression of the brainstem, cerebellum and cranial nerves result in severe symptoms, including difficulty producing speech, swallowing and breathing, double vision and eventually death. It is very unusual for patients to have tumors this large without seeking medical help when the tumors are in a smaller stage. Acoustic neuromas characteristically grow slowly, usually over years. Smaller tumors very rarely grow to the point seen in the figure above.

The choice of which treatment is most appropriate for a patient is based on a number of factors including: tumor size, tumor location, tumor characteristics (cystic versus solid tumors), degree of hearing loss, presence of other symptoms, prior surgery, prior radiation, patient age and health, the presence of syndromic acoustic neuroma (Type 2 neurofibromatosis) and, ultimately, patient preference.

Serial observation, watching a tumor on MRI scans over time, is often the most appropriate form of treatment. However, primary radiosurgery or microsurgery are frequently necessary. If surgery is recommended, one of three primary surgical approaches will be used on the basis of the factors noted above.

Our skull base surgery team is composed of a neurologist, skull base surgeon and neurosurgeon who performs microsurgical lesion resection. During microsurgery, the region of the brain and electrophysiologic nerves compressed by the tumor are monitored.

We perform all three forms of therapy – watchful waiting, radiosurgery and microsurgery